Webcomic / You Say It First 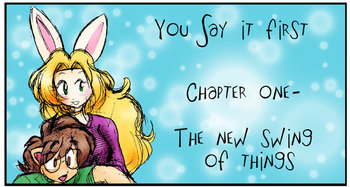 You Say It First was a Funny Animal slice-of-life webcomic by husband-and-wife team Terrence and Isabel Marks that ran from Feb. 20, 2004 to Jan. 25, 2013. It was about Brisbane Adams and his wife Kimberly Taylor-Adams. You can read it from the beginning through this link here

It was a sequel to Unlike Minerva

, which featured Brisbane and Kimberly in a vaudeville theatre.

In 2015, a Spin-Offspring sequel comic, Nicole and Derek debuted that would move the Adams to the country of Sherup, home of Namir Deiter.