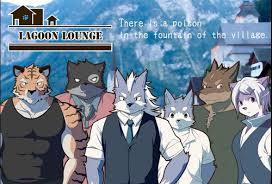 "Never go near the fountain, much less drink its water."
Himitsuri no Lagoon (秘密裏のラグーン "Lagoon's Secret"), also known as Lagoon Lounge, is an adult Kemono yaoi-themed Visual Novel and Dating Sim created by the KAIJYU circle. The main site is here

. The developer's blog is here.

The game's storyline is followed with two sequels, titled Yaneura no Lagoon (屋根裏のラグーン "Lagoon's Attic") and Irori no Lagoon (囲炉裏のラグーン "Lagoon's Hearth"), known as Lagoon Lounge 2 and Lagoon Lounge 3, respectively. The game and all of its sequels are complete. The series are originally written in Japanese, and has been translated in English. Both the Japanese and English version of the series have been released, and are available in Windows 2000/XP/Vista/7. App Locale will still be required for gameplay, though.

The story: All three games in the series have the story narrated from the perspective of the protagonist, Kuugo, a dark-furred Japanese Shiba Inu who reunites with an old friend after losing his job and starts working at a small town cafe dubbed The Lagoon Lounge, while also running into mischievous acts. Business has been good lately due to an increase in tourism — people are coming to experience the mysterious phenomenon known as "The Giant of Harusu." But then, other strange things start to occur, and Kuugo begins to wonder if something sinister is behind it, while solving the mystery of 'The Poisonous Fountain'.

The story captures many aspects of Japanese slice-of-life stories. The plot itself revolves around the day-to-day internal operations of the Lounge and its employee's relationships with one another. There is also an unchecked fascination with a mysterious fountain in the middle of town which appears to have some connection to the rampant earthquakes which have been occurring sporadically, dubbed "The Giant of Harusu."

The gameplay is relatively short, ranging around 2 to 10 hours.