"I know I am predisposed to being nervous, and I hope I am simply imagining things yet again, but still...it is disturbing me. "
— Gideon 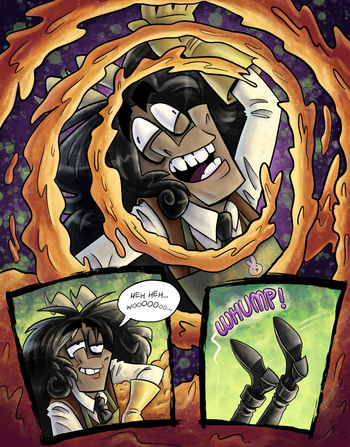 is a psychological horror webcomic created by Lutzbug

. It launched on November 19, 2017 and is currently hosted on ComicFury.

Rhodes and Dempsey are a young married couple who are just getting started in life. They'd like to move forward with their own careers and goals, but they keep getting distracted by everything from cutesy video games to tasteless late-night shows about serial killers. Late one night, Dempsey comes home with a wild story about running into a jittery man at the grocery store who buys almost nothing but a generic macaroni product called "Krazy Noodles." Much to Rhodes' hesitation, Dempsey comes up with a plan to go spying on him the following week so that Rhodes can see him for himself. They might think they're just going on a funny little adventure, but neither of them have any clue how much trouble they're about to cause—not only for themselves, but the guy they want to stare at.

Meanwhile, Gideon wants to be left alone so he can build his noodle sculptures in peace, but his worst fears come true when he realizes that he's being followed around by two strange guys at the grocery store. It doesn't help that he's being haunted by a psychic vampire incubus named Gabriel, who pretends to be his best friend but encourages his worst paranoid tendencies. He already deals with suffocating anxiety—how will he cope with being viewed like a zoo animal?

Tropes that show up in this comic: