Literature / How to Live Safely in a Science Fictional Universe 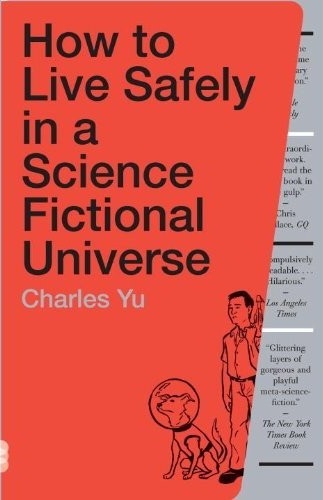 When it happens, this is what happens: I shoot myself.
Not, you know, my self self. I shoot my future self. He steps out of a time machine, introduces himself as Charles Yu. What else am I supposed to do? I kill him. I kill my own future.

Charles Yu, time machine repairman, lives a weary, faintly disappointing existence in Minor Universe 31. His mother is trapped in an hour's time loop of her own choosing. His father, an inventor of time travel, has vanished into some point or another, and his only companions are a neurotic computer system, TAMMY, his computerized boss who thinks he's a human, Phil, and an ontologically invalid dog named Ed.

One day, Charles is startled out of his ordinary, timeless routine when he sees himself come out of a time machine. So he shoots himself, as per the rules of paradoxes. But the future Yu passes on a book that he himself has written—a book called How to Live Safely in a Science Fictional Universe. Knowing his hours are numbered from this point forward, Charles decides to use the book and what little clues he's been given in the hopes of finding his father.

Yeah, it's that kind of book. But while the book deals with majorly mind-screwy elements such as the concepts of time travel and the stories within metafictional universes, at its heart the book is a bittersweet, surprisingly tender story of a son's search for his father.