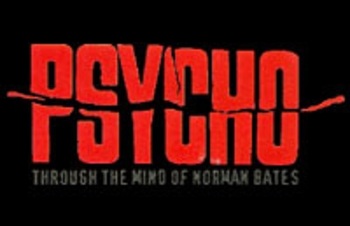 Title art for the second house
A maniacal maze - Check into the Bates Motel if you dare! (1993 description)
At the Bates Motel you can check in, Mother Bates will check you out! (1994 description)
Experience the chillingly violent images that torment Norman's soul. For heavens sake, DON'T GO IN THE SHOWER! (Through the Mind of Norman Bates description)
Advertisement:

Little is known about the first house other than that it took place in a tent behind the Bates Motel facade and that it featured props used in the filming of Psycho IV: The Beginning.

Psycho: Through the Mind of Norman Bates started in the sparsely-decorated reception for the Fairvayle Sanitarium, consisting of a receptionist sitting by the computer at her desk next to filing cabinet and a noticeboard. From there, they would enter a darkened tunnel with lights shining in through holes in the spinning walls, giving the impression of rotating starlight. They proceeded to a padded corridor filled with fleshlike tentacles and containing a zombie-like inmate that would jump at the guests, screaming. From there, guests would walk in a complete darkness through a room with black plastic strips hanging down from the ceiling.

The next room, known as "Sharp Memories" in the concept art, was filled with many oversized, spinning knives hanging down from the ceiling. The knives reflected strobe lights in different directions. Behind one of these, a man in a full black body suit with a knife, possibly Norman himself, would appear to scare the guests, giving the impression of a black, knife-wielding silhouette blocking the light. Next was a room with long racks covered in copies of Norma Bates' dress, with rocking chairs and more dresses floating in the air. Zombiefied versions of Norma Bates emerged from among the dresses to threaten the guests with knives. Beyond that was a room featuring a large number of illuminated eyeballs staring at the guests with same type of bodysuit-wearing scareactor as in "Sharp Memories".

The guests would then enter a corridor with a shower curtain obscuring the knife-wielding Norman on one side and a waterfall on the other. The Norma zombies returned in this room, jumping out with knives from behind the waterfall. The final room was foggy and filled with large, bloodsoaked shower curtains with Marion Crane's corpse on the floor to act as a distraction. This room contained a mix of all the kinds of scareactors previously seen in the house jumping out from behind hidden walls.

This house and its sequels provided examples of: