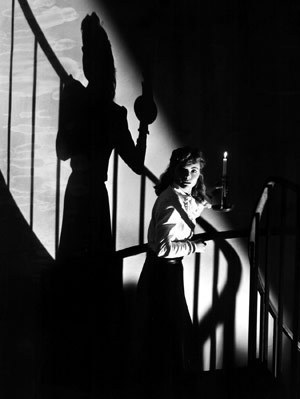 McGuire is Helen, a maid in the splendid Warren family mansion in early 19th-century New England. The community has been disturbed of late by a Serial Killer who preys specifically on women who have some sort of disability—in the past the killer's victims included a woman with a badly scarred face and a "simple-minded" woman, and the film opens with the killer strangling a woman who has a lame leg. This news is being taken very seriously indeed in the Warren mansion, as Helen is a mute, having fallen into psychosomatic muteness as a child when she saw her parents burned to death in a fire. As soon as the latest murder is reported, everyone starts pleading with Helen to flee the town, especially good-hearted Dr. Perry (Smith), who is in love with Helen.

Besides Helen, the household consists of cantankerous old Mrs. Warren (Ethel Barrymore), who is bedridden, her ne'er-do-well son Steven Warren, and her stepson Professor Albert Warren (Brent), son of the late Mr. Warren's first wife. The Warren half-brothers don't like each other very much, with serious Albert being regularly irritated by rapscallion Steven, and both brothers being rivals for the hand of Blanche (Rhonda Fleming), the lovely secretary to the Warren family. Also present in the house are Mr. Oates (Rhys Williams), the handyman, and his wife Mrs. Oates (Elsa Lanchester), the cook.

Remade in 1975 with Jacqueline Bisset starring as Helen.