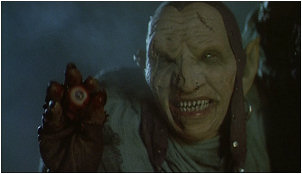 This ain't no fairy tale.
"I smell a baby... smells a lot like a baby named Johnny!"
Advertisement:

Rumpelstiltskin is a 1995 comedy-horror film by Mark Jones, the man responsible for the Leprechaun series, and it stars Max Grodénchik and Kim Johnston Ulrich.

Much like his green counterpart, Rumpelstiltskin is a Darker and Edgier take on the fairy tale. He grants wishes to those with newborns and takes the babies for their souls.

The film opens in 15th century, where Rumpelstiltskin's baby-exchange deal has gone sour and he is imprisoned inside a statue by a witch. He is then brought back to the present (The '90s) by a mourning widow who accidentally makes a wish (while holding the statue) to bring back her gunned-down police husband. Carnage ensues.