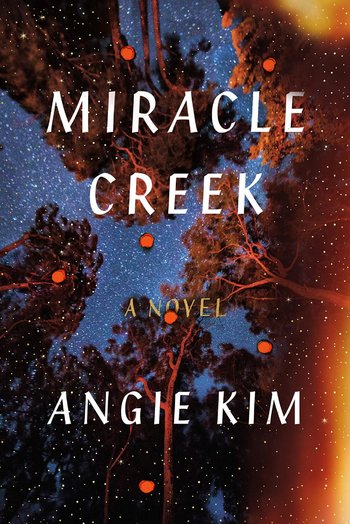 Miracle Creek is a 2019 Courtroom Drama by Angie Kim.
Advertisement:

Miracle Creek is the name of of a hyperbaric oxygen clinic in rural Virginia, where people with conditions ranging from autism to infertility can seek treatment in a pressurized chamber. But one day the oxygen tank connected to the chamber explodes, killing Henry Ward, a mildly autistic eight-year-old, and Kitt Kozlowski, the mother of a nonverbal autistic boy. The explosion turns out to have been caused by a cigarette outside the chamber. The prime suspect is Henry's mother Elizabeth, the only parent not inside the chamber on the day of the explosion, who was extremely vocal about the difficulties of caring for Henry even though he was far less disabled than most patients. Other suspects include Pak and Young Yoo, who owned the chamber and may be trying to commit Insurance Fraud so they can send their daughter Mary to college, and one of the protestors outside the clinic that morning, who may have wanted to prove a point about the safety of hyperbaric oxygen therapy.