Film / Is It the Design on the Wrapper? 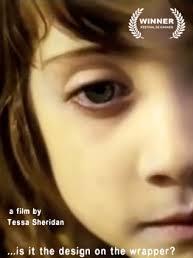 ...Is It the Design on the Wrapper? is a 1997 short film (7 minutes) written and directed by Tessa Sheridan.

A little girl of about six is wandering around, unescorted, in an open-air marketplace. A rather aggressive woman comes up to her and offers her some chewing gum. As it turns out, the woman is a marketing researcher. When the little girl says she doesn't want the gum, the researcher starts peppering her aggressively with questions as to why she doesn't want the gum, including "Is it the design on the wrapper?" Finally, the researcher gets more than she bargained for when the little girl lets forth with a torrent of words.