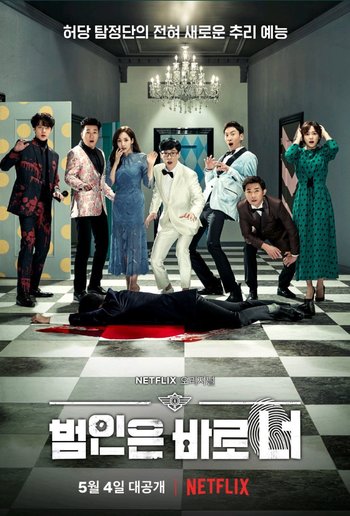 Busted! (Korean: 범인은 바로 너; lit. The Criminal Is You) is a South Korean web television program on Netflix premiering in May 2018. The series features variety show stars Yoo Jaesuk and Lee Kwangsoo; actors Ahn Jaewook and Park Minyoung, and singers Kim Jongmin, Oh Sehun, Kim Sejeong, and Lee Seunggi in a variety show drama that mixes both scripted and unscripted lines to make it the first variety show of its kind in Korea. The program is co-produced with SangSang, a Korean production company that is responsible for X-Man, Running Man, and Family Outing.

Yoo Jaesuk, a cowardly neighboorhood detective, is invited to a party by a mysterious man named M. Upon arrival, he learns that six other people were invited: Ahn Jaewook, a former agent; Kim Jongmin, an errand runner who does menial tasks such as collecting loans; Lee Kwangsoo, a clumsy unemployed man; Park Minyoung, a former flight attendant, Oh Sehun, a choreographer; and Yoo Yeonseok, a regular town resident. The party, hosted by M's boss known as K, turns out to be a murder game masquerade party, wherein they play roles in order to deduce the "killer" of a pre-planned situation. However, as soon as the game begins, M is shot by an unknown perpetrator, which turns the game into a real crime scene. Upon investigation, they discover that the murder and their existences are related to an operation called "Project D", headed by K.

Seung-gi: You never disappoint. You haven't saved a single person.