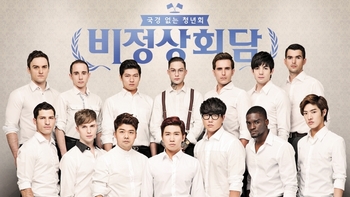 The original G11 from 2014.
"Despite the lack of any official recognition, the self-appointed G's from around the world are convening for the peace and security of global youth hence the Non-Summit Meeting was formed.
—The intro to every single episode
Advertisement:

The show consists of the three Korean hosts and the G11, eleven non-Korean men, who are living in Korea and debate on various cultural and everyday life topics, with comparisons to South Korea and their home country. "Visiting interns" were incorporated into the cast, as regular members took vacations, and some left the show. The debate topics are presented by visiting South Korean guests.

While it started slow with its first few episodes, it started picking up steam and popularity as Koreans fell in love with the foreign panelists, who spoke fluent Korean (and some claimed that a few spoke Korean even better than them). They ended up on other TV shows and commercials since then; in 2015, the show won the Baeksang Award for Best Variety Show.

Despite having an initial order of twenty episodes (with the show almost canceled after episode seventeen due to a scandal involving the Japanese national anthem), its popularity expanded the series to 177 episodes, the most recent one airing on December 4, 2017. The hosts and JTBC wanted to take a three-month hiatus because another drama was showing; even after it ended, the show has yet to return.

The tropes the guests would like to discuss today are:

"Until the day we all become normal."