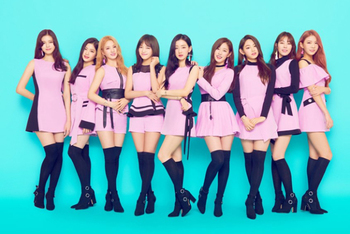 gugudan (usually written as gu9udan or gx9) was a South Korean Girl Group under Jellyfish Entertainment that debuted in 2016 and disbanded in 2020. It was Jellyfish's first girl group.

The group had eight members: Mimi, Hana, Haebin, Nayoung, Sejeong, Sally, Soyee and Mina. note The ninth, Hyeyeon, departed in 2018, citing health concerns and a desire to focus on school. Three members - Nayoung, Sejeong, and Mina - participated in the first season of Produce101. Because they were in the final 11, Sejeong and Mina debuted in I.O.I.

Their first subunit 'gugudan 5959' or 'gugudan Ogu-ogu' - which consisted of their two youngest members - debuted August 10, 2017 with the single 'Ice Chu'.

Another subunit 'SEMINA' - Sejeong, Nayoung, Mina - debuted July 10, 2018 with 'SAEMINA', the subunit name being made up of the first syllables of their names.

The group went on hiatus in 2018, and following two years of inactivity, announced their disbandment

in 2020. Fans were saddened but not surprised, as Sally (while appearing on a Chinese survival show) had revealed that the girls had essentially been evicted from their dorms and told to not come back unless they were specifically requested to.

She also mentioned that there had been a rather large popularity gap between two of the membersnote speculated to be Sejeong and Mina, which many suspect lead to the group not succeeding (it's important to note, however, that all the girls seem to be on good terms with each other despite this).