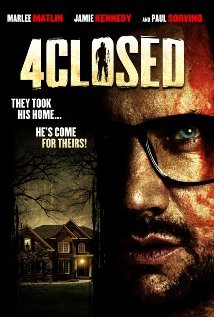 4Closed is a 2013 film by The Asylum featuring Marlee Matlin, James Denton, Paul Sorvino, and Jamie Kennedy in a tale of what happens when someone just does not want to let go of the family home. Jake and Ally Turner purchase a beautiful foreclosed home for pennies on the dollar, only to find out when they move in that Forrest Hayes is living there and claims he owns the house. After a brief legal scuffle, they have the house, but learn that Hayes may not be as absent as they thought.