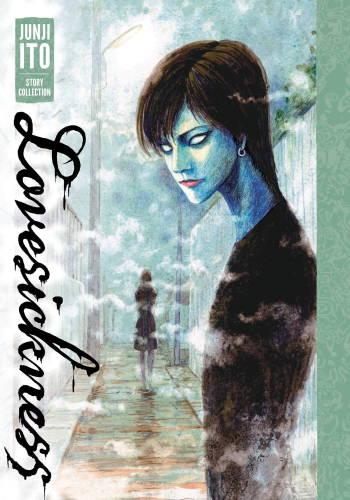 Lovesickness (Lovesick Dead note also known as Undying Love and Intersection Fortune Telling) is a short horror manga series from the Kyoufu Manga Collection by Junji Ito, known for such works as Tomie, Uzumaki, Gyo, and The Enigma of Amigara Fault. It was later reprinted in the Lovesickness hardcover collection, along with several other short stories.
Advertisement:

Ryusuke, a boy returning to his foggy hometown of Nazumi, notices that its unique form of fortune-telling has become increasingly popular since he left. People will go to crossroads in the fog and cover their faces, and ask the first passing stranger to answer their questions to find advice and solace in their lives. But ever since he returned, girls who go to the crossroads have begun to break down and violently kill themselves after hearing an answer.

While he seeks to find the cause and solution to this disturbing problem, he is challenged, for not only are the dead not leaving the crossroads, but Ryusuke fears that he may be tied to the mysterious events in more ways than one...