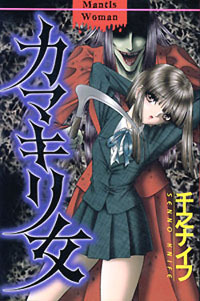 Mantis Woman is a horror anthology manga written and drawn by Senno Knife. Released in Japan in 2000, it got a limited English language release in 2003. It features six stories based on various Japanese Urban Legends.

The series features examples of the following tropes: