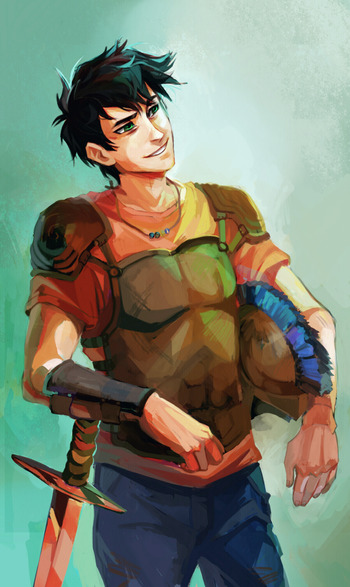 "If my life is going to mean anything, I have to live it myself."
Click here to see Percy in The Trials of Apollo. 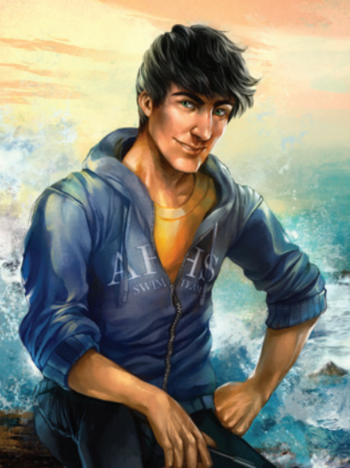 Appears in: Percy Jackson and the Olympians | The Demigod Files | The Heroes of Olympus | The Demigod Diaries | Demigods & Magicians | The Trials of Apollo | Magnus Chase and the Gods of Asgard

Advertisement:
"Only a thousand times? Oh, good...I thought we were in trouble."

The son of Poseidon, god of the sea, and clear-sighted mortal Sally Jackson. The titular hero of the first series, the books start in Percy's sixth grade year when he kills one of the Furies, masquerading as his pre-algebra teacher. He is introduced to Camp Half-Blood along with the audience and struggles to survive quests in the world of gods and monsters while coming to terms with likely being the demigod at the center of the Great Prophecy.

Percy is one of two titular "lost heroes" for the first book of the second series, but he's back in the second, amnesiac and running from monsters. He is brought by Hera/Juno to the Roman Camp, Camp Jupiter, and realizes that his destiny is far beyond being the half-blood mentioned in the last Great Prophecy. Having gone through five books' worth of Character Development and combat experience on his own, Percy is far more mature and dangerous in the second series. He easily befriends the rest of the Seven, despite a few clashes with fellow ace Jason. However, his Fatal Flaw from the previous series — personal loyalty — is still in play, with Mars mentioning that it would greatly hinder the Seven's quest to save the world.

As of the third series, he has gone into semi-retirement to stop burdening his family and hopefully graduate from high school. This doesn't stop him from helping out any demigods (or others in trouble) who come his way.

Percy's main weapon is Anaklusmos/"Riptide", his Celestial Bronze sword (formerly owned by Hercules). He also has the ability to command water and all the Combo Platter Powers that come with this (see below).