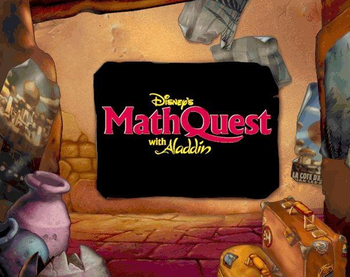 Disney's Math Quest with Aladdin is an 1998 Point-and-Click Edutainment Game for PC based on the Aladdin TV series, with Robin Williams surprisingly coming back to reprise his role as Genie, as well as a story that feels just like an episode from the series.
Advertisement:

Deep within a floating pyramid, a cobra slithers across an old lamp and accidentally awakens an evil genie named Bizarrah. Since only a human can be the master of a genie, this technically renders Bizarrah free to do whatever she wishes and sets out on a quest to Take Over the World. When She abducts the heroes it's all up to Genie, Iago, and You to find the others and stop Bizarrah.

A playthrough can be found here.