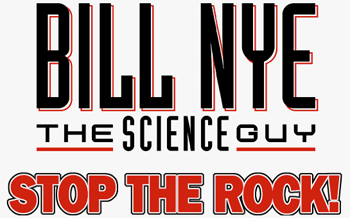 Bill Nye the Science Guy: Stop the Rock! is a 1996 adventure game developed by Pacific Interactive for Windows 3.x and Macintosh computers based off of the TV show. The game casts you in the role of a new science researcher at Nye Labs, Bill Nye's fictional science complex, located somewhere in Southern California. Almost immediately upon arrival, you're thrust into saving the world from the killer asteroid Impending Dumé by solving the riddles posed by the now-sentient, human-despising AI controlling MAAX, the Meteoroid And Asteroid eXploder, so it will actually do the job it was programmed to do. Oh, and you have just five days before the asteroid hits.

Aside from Bill Nye as... well, Bill Nye and Pat Cashman as Chet Brinkow, the game's scenery-chewing news anchor, the game has none of the recurring characters from the TV show, instead opting for an exclusive cast of original characters.