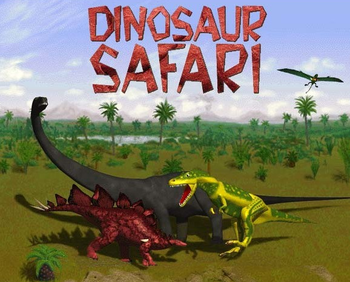 Dinosaur Safari is a PC game developed by Creative Multimedia Corporation and Mindscape.

You have been hired by the National Chronographic Society to help collect photographs for their latest book "Dinosaur Safari: Dinosaurs of the Mesozoic Era". Your assignment is to photograph and videotape dinosaurs and other extinct reptiles to document for them.

As a result, you will frequently be required to travel to various points in history ranging from the Late Triassic to the Late Cretaceous time periods in the National Chronographic Society's Chronosphere, and locate the dinosaur you have decided to document. If you return to the building with the photograph and/or videotape of the selected dinosaur, you will be rewarded for your efforts with Energy Credits, which power the Chronosphere, and Data Crystals, with which you can record more dinosaur data. But please be certain not to run out of the former, or else your assignment will become impossible.

Dinosaur Safari was released in 1996.

"Have a nice vacation! Goodbye!"