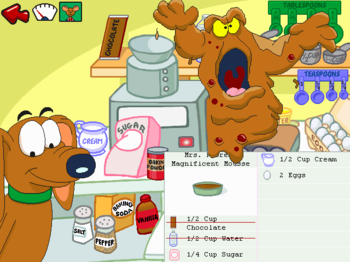 JumpStart 1st Grade (known as Jump Ahead Year 1 in the United Kingdom) is the title of two products in the JumpStart series of Edutainment Games, the first released in 1995 and the second in 1999. A third version, released in 2002, was titled JumpStart Advanced 1st Grade instead.

Both the 1995 and 1999 versions take place in a school setting and feature an anthropomorphic dog named Frankie as your Exposition Fairy. The main location is the first-grade classroom, from which you can travel to a school hallway that leads to other locations, such as the cafeteria and the playground. Both versions feature roughly the same educational activities, although sometimes with a changed premise.

In the 1995 version, the school is located in an ordinary suburban neighborhood, and the teachers and students are all human. Aside from Frankie, the only anthropomorphic animals are the mice who live in the classroom's mouse hole. One of these mice will reward you with a milk cap every time you earn one hundred points. The vague goal of the overall game is to collect all the milk caps.

In the 1999 version, the students remain human, but the teachers are now anthropomorphic animals. Additionally, the school is now located on an island, and the overall game has a nautical theme. Instead of earning milk caps, you earn clues that will allow you to take a sailing ship over to a neighboring island and find a treasure. There are six neighboring islands in total, each with their own theme.

A first-grade introduction to Australia.

Example of:
Land Down Under

A first-grade introduction to Australia.