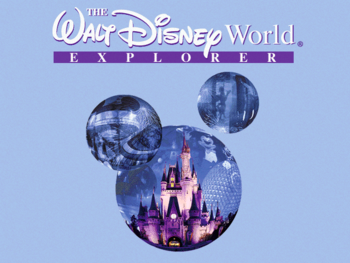 OK, let's get one important thing out of the way. Despite the namespace used for this page, this isn't a video game. It's more like a glorified slideshow viewer program. Got that? Good.

Anyway, The Walt Disney World Explorer is a Microsoft Windows and Apple Macintosh computer application developed by Mindsai Productions and published by Disney Interactive that detailed the Walt Disney World Resort near Orlando, Florida. It was first released in 1996 (exact date unknown) as part of the resort's 25th anniversary that year; the executable is even named "wdw25.exe".note The latest program files (based on "date created") on the application's original Windows CD-ROM have a creation date of August 17, 1996, with the "Readme.txt" file having a creation date of August 19, 1996, suggesting that the application went gold around that time. It was thus most likely released in September 1996, just before Disney World's 25th anniversary on October 1, 1996, although it's also possible that it was officially released on that exact date. This program had users "explore" a very stylized depiction of the resort with Tinker Bell as their cursor, clicking on various hotspots to view slideshows of various topics depicted within. These topics are narrated by Hettie Lynne Hurtes and Disney voiceover veteran Corey Burton, both of whom go over the basic history and notable facts about the resort.

OK, let's get another thing out of the way. This was really a promotional tool for Disney to digitally promote the resort back in the dial-up era of the Internet. What other way you can motivate people to plan and pay for a trip to Disney while making money off of them before they even start their planning than a carefully curated CD-ROM? This program, that's how!

A Second Edition was released in 1998 (exact date also unknown)note The latest files on the Second Edition's Windows CD-ROM have a date created of March 12, 1998, likely going gold around that time as well. It was most likely released in April that year for Disney's Animal Kingdom's opening on Earth Day, April 22. that added topics such as Disney's Animal Kingdom, Buzz Lightyear's Space Ranger Spin, Disney's Coronado Springs Resort, and more. However, as the Internet became more ubiquitous and computer graphics improved,note the program itself runs at 640 by 480 VGA resolution at 256 colors. Disney never released any further editions afterward. Today, both the original and Second Edition releases are now seen as a digital Time Capsule for Disney fans to relieve a golden era of the beloved resort.