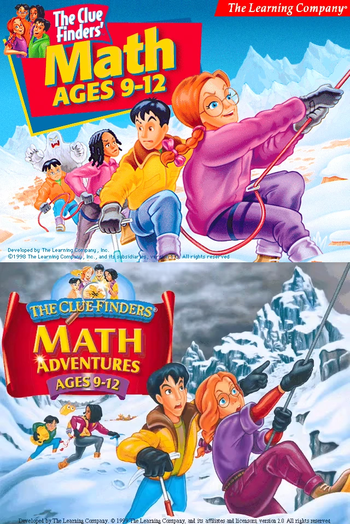 1998 title screen (above) and 1999 title screen (below)
The ClueFinders Math Adventures Ages 9–12: Mystery in the Himalayas is an entry in the Clue Finders series of Edutainment Games.
Advertisement:

When priceless treasures are stolen from a small Himalayan village, the ClueFinders come to investigate. Playing as Joni, Santiago, and LapTrap, your task is to recover the treasures one by one. To find a treasure, you need to identify the object that was stolen, the person who stole it, and the place where it's hidden. By playing the math-themed Mini-Games in the village, you're awarded with clues that help to narrow the range of possibilities. If you successfully pare it down to the correct combination, the treasure is recovered, and you begin work on the next one. As more and more treasures are found, the various culprits begin to insist that they were not truly responsible for the thefts. They speak instead of having been forced to do it by the mysterious yeti!

The game was originally released in 1998, then re-released in 1999 with an overhaul to many graphics, redone cutscenes, and some storyline alterations. This remains the only game in the series to receive this sort of treatment.