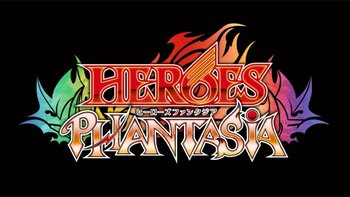 In a world much like our own, numerous troubling incidents occur all over the planet. People known as Native Alters with strange powers instigate anti-social acts. Monstrous creatures called Orphan are meddling in human society. Equally monstrous beings known as Chiropterans cause a rash of vampire-related murders, and several resurrected historical figures attack the U.S. Library of Congress. In order to counter all of the above, several organizations rise up to fend off these threats and maintain peace and order: Holy, HiME, Red Shield, and the Special Operations Division of the British Library.

And elsewhere, a group of frog-shaped aliens have been sent here from planet Keron to perform a reconnaissance of our planet, and if possible, conquer it.

Heroes Phantasia is a Massive Multiplayer Crossover RPG by Banpresto and Bandai Namco, the latter being responsible for publishing the game. It was released on January 19, 2012 for the PlayStation Portable that bands together numerous characters from Sorcerer Stabber Orphen, Read or Die, Rune Soldier Louie, Blood+, Slayers Revolution, My-HiME, Darker than Black and Sgt. Frog, along with several original characters created specifically for this game, in a plot to (What else?) Save Both Worlds.

The official site is found here