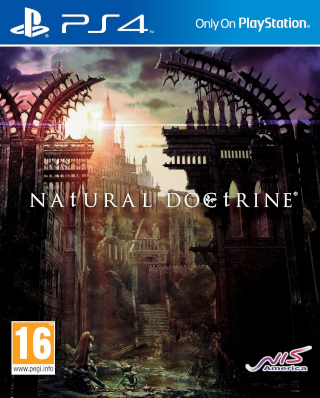 In a chaotic world, a single fortress city is humanity's last beacon. Humans have taken up sword and magic against the encroaching beasts to keep their light from fading.
But some travel into the wilderness, seeking fortune. One such pair is Geoff and Vasily, who act as bodyguards for a young explorer, diving into mines overflowing with dangerous creatures.
Advertisement:

Natural Doctrine (styled as NAtURAL DOCtRINE) is a Nintendo Hard Turn-Based Strategy RPG set in a world where a rare magical element called Pluton is essential to life itself. Unfortunately, it's downright lethal to humans, so they have to raid monster dungeons in order to gain supplies of refined Pluton, which is safe to use.

The story starts with Geoff and Vasily proving themselves to an explorer named Anka, with a bit of help from veteran mercenary Zeke. They go on what appears to be a run of the mill dungeon crawl, until they encounter a vicious group of carnivourous insect monsters called Gorians...

The game is played out over a series of grid-based maps. Any character is capable of moving two squares each time they move, and attack either adjacent (for melee weapons) or up to three squares away (for ranged). What Natural Doctrine brings new to the table is Initiative and Links.

Rather than playing out Player then Enemy turns, each character gets their own turn, alternating between player and enemy forces. But, characters can Link their actions together, allowing them to move multiple characters before the enemies next turn. Alternatively, they can simply kill whichever enemy has the next turn, skipping over their move.

It becomes a balancing puzzle of risk and reward, because if you move too many of your characters, the enemy will get free rein with their own forces, but if you don't pull off the kill, they'll Link all their attacks to kill one of your characters, and trigger a Game Over.

There is also an online multiplayer mode, rare for a turn-based SPRG. Notably, you collect cards that represent units so you can ause them in your party. What's more, you can collect pretty much any unit in the game. Yes that includes enemies, NPCs, and the size 4 giant bosses.