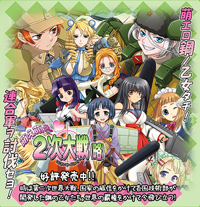 Not your grandfather's World War II.
In a World... where girls of indominable will were created to fight by land, sea, and air, World War II has broken out, leaving both the Axis and Allies no choice but to ask these young, innocent Tyke Bombs to take to the battlefield.

Moe Moe Niji Taisen is a Turn-Based Strategy game where the player commands cute girls instead of tanks or planes, directing them to defeat their enemies by destroying their clothes.

This game provies examples of: