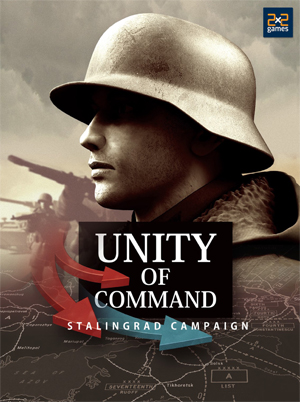 Unity of Command is a campaign/operational-level Turn-Based Strategy PC wargame by Croatian developer 2x2 Games. It is a hex-based wargame similar to more traditional grognardy titles like Panzer Campaigns, but it eschews the huge numbers of units to control and complex user interfaces. This makes it an amazingly accessible wargame with easy-to-understand gameplay mechanics which still manages to capture key operational-level principles including planning, cutting and safeguarding flows of fuel and ammunition, terrain use, and working around adverse weather conditions without drowning the player in excessive detail.

The base game was released in 2011 and is set in the Soviet Ukraine and Caucasus from mid-summer 1942 until the Rasputitsa (lit. 'season of mud') of Spring 1943, including Fall Blau and Operation Uranus. The 2012 DLC Red Turn covers almost all of the successful Soviet offensive operations from summer 1943 to the Berlin Offensive. The 2013 DLC Black Turn covers Germany's failed Barbarossa and Taifun offensives of summer-winter 1941.

A sequel, Unity of Command 2 was released on November 12th, 2019. It uses uses a 3D engine, and focuses on the Allied forces during the Western Front and Northern Africa campaigns.

Unity of Command provides examples of: