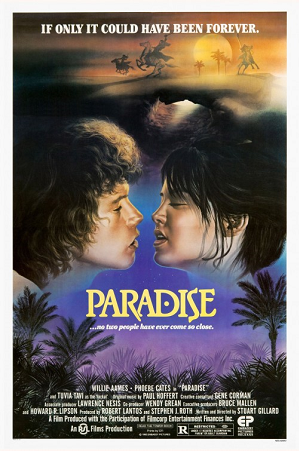 Paradise is a 1982 teenage romance and adventure film starring Phoebe Cates and Willie Aames. The movie also has a theme song sung by Cates, which was one of the leaders of the pop music hit parade around the world for a long time, becoming one of the biggest hits of the 1980s and giving resultant fame to the film, more so than the reverse.

The film is set in the Middle East, in the year 1823, in which a rich British girl named Sarah meets David, the son of two Christian Missionaries. They and their respective parties join a caravan from Baghdad to Damascus, which is soon attacked by raiders led by a relentless sex slave dealer known as The Jackal. David and Sarah escape, eventually coming upon an oasis where the two fall in love. In between enjoying their paradise, Sarah and David find themselves constantly fleeing the Jackal and trying to find civilization.

The film has been compared to the more famous The Blue Lagoon, which has similar themes; Two young people find themselves abandoned in a world with no adult supervision, in fact no other people anywhere. Thus they have total freedom, inevitably learning all about love and sex, as well as basic survival techniques.