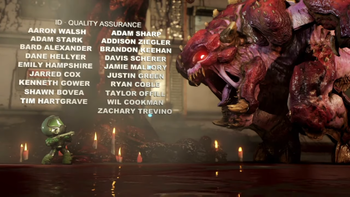 Why don't you pick on someone your own size?!
"Should you find yourself caught in a level 3 demon contamination event, it is important that you remain calm. A Tier 3 fellow wouldn't panic, and neither should you."
— The UAC spokesperson blasphemously boasting about the UAC's seven-day work ethic.
Advertisement:

Doom's always had its fair share of humor ever since its beginnings in 1993, and this reboot is obviously no exception.

Weaponizing demons, for a brighter tomorrow.