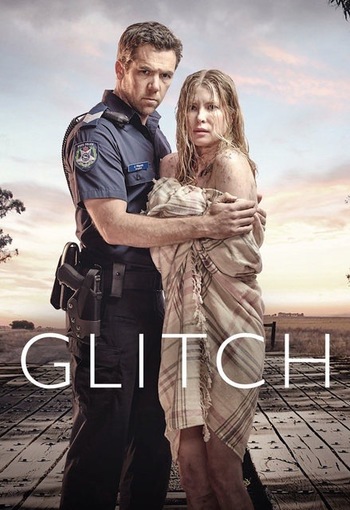 Glitch is an Australian TV series produced by Screen Australia and The ABC.
Advertisement:

In the country town of Yoorana, Victoria, police sergeant James Hayes investigates a disturbance in the town cemetery and finds several people naked and covered in dirt. Soon, James along with Dr. MacKeller realise that they have mysteriously come Back from the Dead and can't remember their lives. Meanwhile, a teenager named Beau meets up with Paddy, another of the resurrected who didn't go with James.

The resurrected people date from various decades, from James's late wife Kate who has been dead for a mere two years, to Paddy who was the first Mayor of Yoorana and died over 150 years ago. And there's the mysterious and violent John Doe who isn't inclined to say much...

Over the course of the series the resurrected regain their memories while James and Dr MacKeller try to keep the resurrected under wraps, which isn't so easy once James' colleague Sergeant Vic Eastly starts poking around.

The ABC had the entire 6-episode first series available on its iView service from day 1, though it expired on the 27th of August 2015. It became available on Netflix in October 2016, and a second season began filming late that year as well, with global release scheduled for 2017. Netflix globally released series 3 on September 25, 2019.

Even Kirstie, who died in 1989, has a little trouble operating a smart phone at first.
Advertisement: