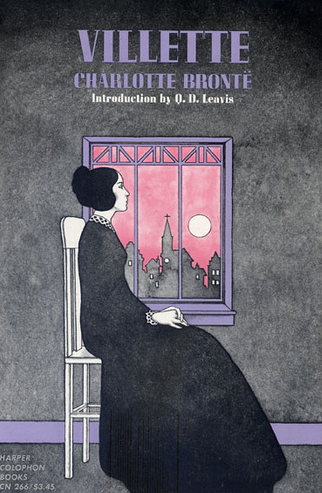 A novel by Charlotte Brontë, Villette follows Lucy Snowe, an orphan from England who searches for greener pastures in the fictional town of Villette. She takes care of the headmistress's children at a school for girls until she is thrust into the role of an English teacher. Lucy struggles to find companionship and a place where she belongs, often having depressive episodes and supernatural encounters. She also deals with the strange new culture she lives in, overcoming the Language Barrier and feelings of being an outsider, and sorts out her affections for two very different men.
Advertisement:

The novel is notable for portraying Lucy's depression very accurately, as well as for its mysterious and clever usage of the Unreliable Narrator.

This was Charlotte Brontë's final and most autobiographical novel, partly inspired by her own experiences in Brussels and her unrequited passion for Constantin Heger. Villette was written after all of Charlotte's siblings had died, and her outlook on life is decidedly bleaker than it was in Jane Eyre.