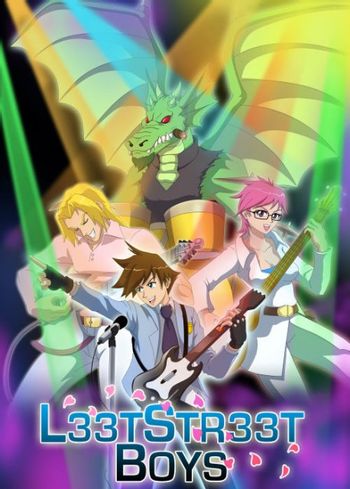 (also known as L33tStr33t Boys) is an Anime otaku fantasy band most well known for its single and music video "Yuri the Only One".

Founded in 2007 by vocalist/songwriter Matt Myers, and guitarist/producer Ryan “Frogs” McCormack, the band centers around a prep school punk singer (Matt), a metrosexual elf guitarist (Justin), a lesbian healer bassist (Rose) and a fire breathing dragon drummer (D-Dos). Its name is a spoof on Backstreet Boys, with the number 3s replacing the letter Es to form the popular gamer slang word, "l33t".

Matt and Frogs briefly played together in high school, and reconnected when Frogs came to Boston on a band tour. The two realized a mutual interest in anime, and began collaborating on select video game and anime music projects.

Based on an acoustic demo of "Yuri the Only One" for a live performance at ConnectiCon 2007, Matt and Frogs teamed to produce a full band arrangement of the song. Nathan "N8" Soria was subsequently hired to produce an animated music video featuring original fictional characters as well as well-known anime and video game icons.

Debuting at Anime Boston 2008, the video was posted on YouTube, where it quickly garnered over half a million views and was discovered by Video Games Live executive producer Tommy Tallarico, who put it into rotation as part of the Video Games Live show. Since then, "Yuri The Only One" has been screened at numerous Video Games Live events throughout North America, South America, Europe and Asia; the song single also appears as a bonus track on the album "Video Games Live: Greatest Hits Volume 1".

The LeetStreet Boys released their self-titled debut album "LeetStreet Boys" in February, 2009, and are currently supporting it with performances on the North American anime convention circuit, including recent appearances in Los Angeles, Alaska, Boston, New York, Missouri and Texas. Matt and Frogs continue to head the group as its only permanent members, producing a wide array of branded multimedia product, from music and music videos to webcomics and video games.

. Strangely, the group seems to be totally unaware of this, thinking that they have gained prominence in Japan and this was a tribute.

They also have a webcomic.

This (fictional) band provides examples of:

The songs provide examples of: