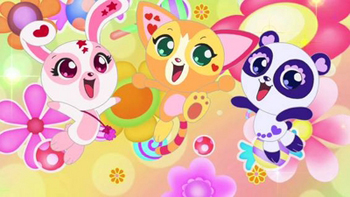 The Characters from the Japanese/Korean Animated Series. It's Sweeter than it sounds.
Advertisement:

What do we get when Bakugan is stripped off of its manliness and made exceedingly cute? You get its sister series, Zoobles.

Zoobles is a cutesy Japanese/Korean Anime adaptation of the Toyline of the same name produced by Dong Woo Animation in Korea with Japanese producer Mitsuko Oya in charge of the anime's production and both Kazuya Hayashi and Nam Jong-Sik in charge of the character designs. The series began airing on Korean broadcasting station SBS in May 18, 2011, with an official Japanese dub version will begin airing in Japan in TV Tokyo in February 5, 2012, replacing Bakugan Battle Brawlers: Gundalian Invaders in it's initial timeslot.

The series itself is set in the sweet and sugary world of Candy Land, where all Zoobles live. The story revolves around the three main Zoobles: Chevy, a Cat Zooble with an Orange Flavor, Coron, a Rabbit Zooble with a Strawberry Milk Flavor and Panky, a Panda Zooble with a Blueberry Yogurt Flavor. The three of them live in Candy Town, living and playing together with their friends and getting in serious misadventures as they learn to solve each problem they face. With each problem they face, the three ask for Kumanpa's advice for their solutions on them and their friends' problems, but with mixed results.

Not to be confused with Zoobilee Zoo. No, seriously.

The Toys can be found here, also the games can be also found Here.