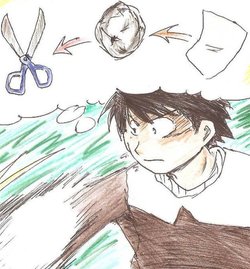 Rock–Paper–Scissors is a Serious Business
But we as humans are not good at playing randomly so can we really say it's a game of luck?
— Ammar in chapter 1.
Advertisement:

an Arabic manga style Web Comic series about Rock–Paper–Scissors,started in late 2013 on Komikia

the English version which started in mid 2014... can be seen HERE

about Contest called Hand Command contest where lucky boys and girls play Rock–Paper–Scissors (yes just that) to get the title "Hand Command champion".

while the protagonist sees it as a mere game of luck all the others see it as a Serious Business!!

from the creator of Final Enter

examples of tropes in this series: