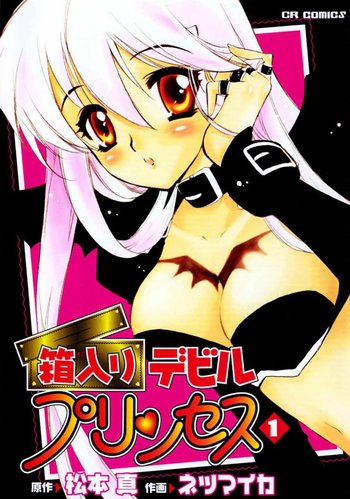 3 Wishes and Your Soul Is Mine!!!
Advertisement:

Once upon a time in Japan, a junior-high school boy named Keita Kusakabe received a box from his childhood friend, Natsuki Morishima, who claims that the box is magical and can grant the user 3 wishes. The box itself contains a beautiful girl with pink hair named Maki, who tricks Keita at first by saying that she is a genie who can grant 3 wishes. However, as it turns out, Maki is actually a powerful devil and will take Keita's soul after he gets his 3 wishes granted.

However, despite being a powerful demon, Maki is an inexperienced one and doesn't know how to be evil because she is a demon princess who was sheltered in a castle in her childhood years. As a result, she relies herself on a book that her mother, the Queen of Hell, created to become a better devil in the future. However, as she stays too long with Keita, both of them are falling in love with each other and things get interesting from there.

Written by an obscure mangaka, Makoto Matsumoto, and illustrated by Maika Netsu. The manga itself was licensed by Broccoli Books and it was serialized by Comic Rush at 2007. Despite the manga having apparently ended and already reached 9 volumes and 40 chapters as of now. The series ended in 2014 and is currently discontinued because Comic Rush is no longer publishing.