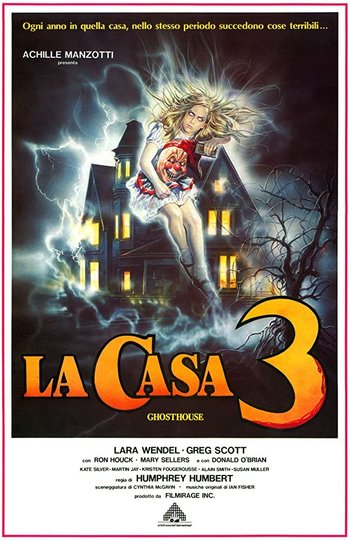 La Casa 3 (aka Ghosthouse) is a horror film from the year 1988 directed by Umberto Lenzi (Cannibal Ferox), released as an unofficial sequel to the Evil Dead films in Italy, where the first two films were known as La Casa and La Casa 2.

One night, a ham radio operator receives an odd message of someone begging for his life. He and his girlfriend track the signal to an old house where group of youths are staying with their camper. They decide investigate the matter together. Little do they know that the place is cursed, and there will be lots of bloodshed coming their way.

The film was followed by two sequels, La Casa 4 (aka Witchcraft) and La Casa 5 (aka Beyond Darkness), both which were also unofficial additions to Evil Dead.

Ghosthouse has the examples of: