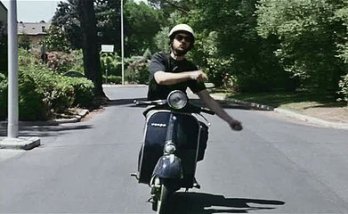 "On my Vespa".
Advertisement:

Caro Diario (Dear Diary) is an Italian film directed by Nanni Moretti and released in 1993. Divided in three parts, it is a Slice of Life story following Moretti himself through a few months of his life, as he spends a carefree summer in Rome, visits a friend in the Aeolian Islands, and goes through a series of medical treatments for a condition that baffles mainstream and alternative doctors alike.