Literature / The Hammer and the Cross 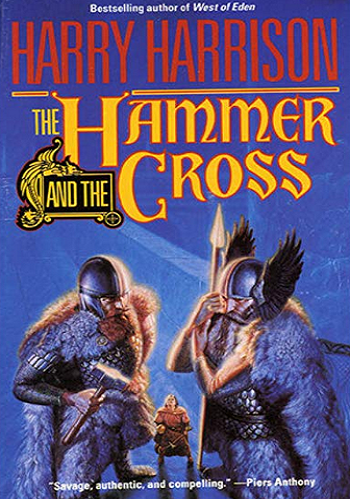 Shef was born in a noble household, son of the thane's wife and a Viking raider. He was raised in the thane's household alongside his stepfather Wulfgar's legitimate son Alfgar and Godive, Wulfgar's daughter by a concubine. Shef is treated like a slave, and lacks only the iron collar about his neck to make it official. Despite this, he is technically a freeman and has a sword that he made himself, hiding in the forge from his stepfather's rages. Thus he is with the thane's levy when the great Viking Ragnar Lothbrok is captured, and witnesses his execution in the Snake Pit of king Ella of Northumbria.

When the four Ragnarssons hear of their father's death, they come for vengeance with their mighty army flying the Raven Banner. One of the outriders is Sigvarth Jarl, who raided Shef's home once before and left his mother pregnant. This time he crowns his atrocities by maiming thane Wulfgar and taking Shef's childhood sweetheart as a slave to give to the dreaded Ivar the Boneless. Shef schemes his way into the Viking camp to rescue her, and finds himself caught up in the fates of kingdoms and armies.

An ill-fated rescue attempt leaves Godive in a worse slavery yet, married against her will to her brother Alfgar, while Shef has an eye put out for his betrayal of the army. By his actions, he splits the army, with the followers of the Way, a new version of the Norse faith built as a direct rival to Christianity, following Shef, while the pirates and berserkers who value blood and force above all else stay beneath the banner of the Ragnarssons.