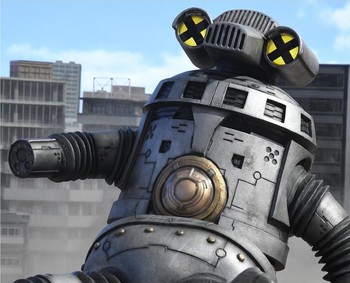 As if there's no other way to tell that Sevengar is currently inoperable...

Episode 1: I Ask That You Chant my Name!
Episode 2: A Warrior's Principle
Episode 3: Live Coverage! The Monster Transport Operation

Episode 9: The Unidentified Object Convoy Order
Episode 10: Here Comes the Space Pirate!
Episode 11: What Must Be Defended
Episode 12: The Cry of Life
Episode 13: I'll Feast on Medals!
While still having it's Tear Jerker moments here, Z does get back to it's silly roots quicker in this episode.
Episode 14: Four Dimensional Capriccio
Episode 15: A Warrior's Duty
Episode 16: The Lion's Cry
Episode 17: Beliarok
Episode 18: Do-Over in the Year 2020
Episode 19: The Last Hero
Episode 20: To Care and What Lies Beyond
Episode 22: Individual Tomorrows
Z and Zero Audio Drama