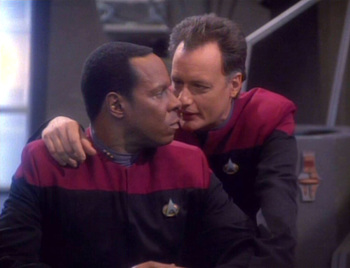 I wouldn't get too close, Q.
Advertisement:

Bashir is telling a gripping story to a young floozy at Quark's while O'Brien eavesdrops. It turns out that Bashir's story isn't about some adventure he was on, but a test he took at Starfleet Academy. O'Brien can barely contain his disapproval that the girl is so entranced by such a lame story. When the two men are called away, the doctor brags to O'Brien that exam stories "get them every time." They're called in to extract Dax and her crew from a damaged runabout that is back from the Gamma Quadrant. They manage to get inside, and O'Brien is surprised to recognize Vash as Dax's passenger.

Vash has spent the last two years "stuck" in the Gamma Quadrant, but she doesn't want to talk about why. Instead, she talks to Quark about selling off all the various artifacts she's collected so that she can turn a hefty profit and retire. Bashir convinces her that academics on Earth would be thrilled to hear about her exploits. He makes some moves on her in the process, and they plan a date for dinner.

But lo and behold, Q is onboard. He puts Bashir to sleep and confronts Vash for ditching him. He demands that she come back to him for more adventures. Vash has had a lifetime's worth of Q, however, and announces that she's planning on retiring to Earth with her fortune. Amidst their spat, O'Brien spots Q and runs to tell Sisko, who confronts the extradimensional being. Q provokes Sisko into punching him, which stuns Q but pleases him, noting that Sisko is easier to manipulate than Picard.

Meanwhile, the crew notice that the station is starting to spring leaks due to a strange graviton build-up. If they don't find the source, the station will eventually get ripped apart. Everyone assumes that Q is throwing a tantrum over Vash, trying to get her to beg for his help. He denies it, though he does offer to rescue Vash if she'll return to him. Vash turns him down and continues planning an auction with Quark.

As the auction of Vash's priceless artifacts commences, the station becomes unstuck in space and starts hurtling toward the wormhole. Everyone will get torn to pieces if they don't do something fast. The crew figure out a way to track the source of the graviton build-up and begin hunting it down. Meanwhile, Quark and Vash obliviously sell off her artifacts to a room full of eager collectors. The final piece, a mysterious glowing orb that is admired by everyone who sees it, goes up for sale. A bidding war ensues, driving the price up to thousands of bars of gold-pressed latinum. An annoyed Q jumps in and bids a million bars, instantly winning.

But before the ecstatic Quark can collect his share, the station crew burst in and identity the orb as the source of the calamity. They beam it outside the ship, where it turns into an enormous golden manta ray thing, which swims into the wormhole.

Q makes one last stab at luring Vash away with him, finally admitting that he enjoys showing her things and experiencing her sense of wonder, something that a jaded old superbeing like him can rarely do. But Vash turns him down one final time. But heeding his words that Earth is a real drag, she instead commits to chasing down a brand-new archeological lead. After she whisks away for another adventure, a newly awakened Bashir stumbling along and asks if he's missed anything.