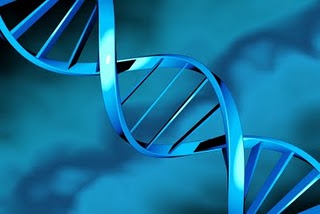 Deoxyribonucleic acid. The Stuff of Life. Or, to be more precise, the Stuff of Inheritance and Instruction. DNA acts as an information carrier which is passed on from a parent organism to its descendants, and which provides the instructions for the protein-production systems in cells to make, well, proteins, which may then make or process other biomolecules, enabling the continuance of a cell.

DNA was first discovered in 1869 by the Swiss doctor Friedrich Miescher as an unknown substance in the nuclei of cells found in pus. In 1919 Dr. Phoebus Levine identified the chemical constituents of DNA, which are nitrogenous bases, phosphates, and a sugar, in this case deoxyribose (RNA, another information carrier, uses ribose instead). It was initially thought that DNA chains were short and the bases repeated in a fixed order, and its function was unknown.

The ability to transform organisms using substances from other organisms was discovered in 1928 by the Englishman Fred Griffith, who found that certain traits could be transferred from one strain of a species of bacteria to another, by mixing heat-killed bacteria of one form ("smooth" Pneumococcus) and live bacteria of another ("rough" Pneumococcus). The Avery-MacLeod-McCarty experiments published in 1944 used an isolation of DNA to perform this, and by 1952 the Hershey-Chase experiments confirmed that DNA was in fact the carrier for genetic information.

The structure of DNA was elucidated in 1952 by the famous Watson and Crick where they gave the familiar double-helix model based on an X-ray diffraction study by Rosalind Franklin and knowledge from Erwin Chargaff's studies that DNA paired. Despite what has occasionally been said, Watson and Crick actually did give thanks to Franklin in their groundbreaking paper, though there is little doubt her work was somewhat diminished for the important role it played and there is still debate as to who really made the discovery. Interestingly, a structure had previously been postulated by Linus Pauling and Robert Corey which was triple-stranded with the phosphate-sugar backbones on the inside. DNA does occasionally form triple-helices, but of a different structure.

In 1958 Crick established what is known as the central dogma of molecular biology (no, not that central dogma, but that one is named after this), that information flows generally from DNA to RNA to protein note Watson later revealed that the reason he chose such an unscientific term as "dogma" to describe his theory because he was confused on what the word meant, never from protein back to nucleic acid. The Meselson-Stahl experiment of the same year established the semi-conservative method of DNA replication (each parent strand is paired with a daughter strand). Crick et al. discovered DNA coded for proteins in non-overlapping triplets of bases (called codons) each of which coded for only one amino acid (the basic building block of proteins; there are 20 amino acids and 64 codons, and most amino acids are coded for by more than one codon). Further work by Khorana, Holley, and Nirenberg established the correspondence between each codon and amino acid, and molecular genetics was truly a science.

Watson, Crick, and Wilkins shared the 1962 Nobel Prize;note Franklin would probably have also shared the prize, had she not died in 1958. Khorana, Holely, and Nirenberg got 1968. Additionally, Arthur Kornberg and Severo Ochoa got 1959 for their discovery of the DNA replication mechanism, and Jacob, Lwoff, and Monod got 1965 for discovering DNA transcription feedback, a method by which gene expression is regulated, and that's just for work with DNA itself. Something like 12 other prizes have been awarded for work in genetics, from Thomas Hunt Morgan's 1933 prize for the discovery of the role of the chromosome to Blackburn, Greider, and Szostak's 2009 award for their work with telomeres.