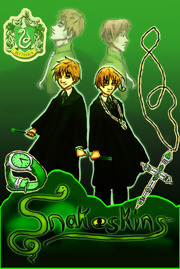 If they only knew what they were walking into...
Advertisement:

Snakeskins is a fic by the Fandom Semi-Famous Lsunnyc/Sunruner. At the start of the story, the Italy Bros are in England's office discussing... well, something Nation-y when Arthur Weasley Floo Powders his way in through the fireplace to inform Arthur of the murder of two Italian children at Hogwarts - coincidentally while the two representatives of Italy are standing right there. Romano is sent back to Rome while England and Italy follow Weasley to Hogwarts and meet Headmistress McGonnagal, who knows a lot more about their true identities than Weasley does. They organise an investigation to go undercover as students to Hogwarts and...Well, the rest you'll have to find out yourself.

And, in case you haven't recognized the name, this is the same author who wrote HetaOni Final Loop and HetaOni Recovery. Yes, that fic. Let that sink in for a sec and it'll give you some idea of what's in store for you.

Here's the link to it on FFN

, though the Tumblr is several chapters ahead of the FFN since she uploads it there first.

- Heroic Vow: Italy with the incomming anniversary of Charlie's death. He refocuses on his mission once again.