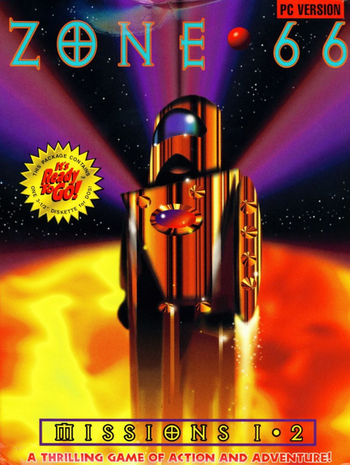 Zone 66 is a 1993 Shoot 'em Up for the DOS PCs, which was initially released as shareware. The game involved controlling a number of aircraft over various landscapes destroying various targets.

The game was created by a North American Demo Scene group called Renaissance, and was published by Epic Megagames (now Epic). Because demoscene programmers frequently worked to maximize hardware performance, the group developed a 386 protected-mode (PMODE) extender to enable the game to play on a 386 processor clocked at 16 Mega Hertz with full screen updates.

Two different soundtracks were available for the game. The first, included with the game, was the Sound Blaster soundtrack, consisting of a mix of FM synth and tracked samples. This particular method of music creation and playback was unique to the Renaissance demogroup.

A second, separately downloadable soundtrack was available for owners of the Gravis Ultrasound sound card featuring high quality music. Some songs in this soundtrack, such as the title theme, are completely different, while others are different arrangements of the same compositions.

The reason for the separate "GUS" music download was due to the size of the Gravis music: as it was nearly as large as the original game, users who only had a Sound Blaster didn't have to waste time downloading music they would never hear. Disc versions of the game included both, as players did not need to download the game.

The game takes place in the 22nd century. An ex-fighter pilot has been tipped by a stranger that his hometown is in danger, but by the time he reaches the city limits, a nuclear bomb destroys the city along with his beloved wife and baby girl. The pilot uses a ship on a landing pad to meet with the stranger at a certain location. When the pilot reaches the location, he finds the stranger is dying but gets some vital information. The pilot then gets a fighter plane and heads to a group of islands to begin his vigilant revenge.

As the pilot progresses from nation to nation destroying each base, the plot thickens and he begins to understand who and what he's dealing with and why the terrorism started.