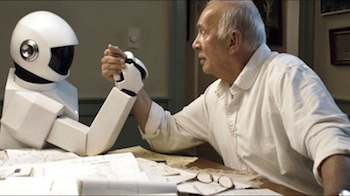 "You win, I'll eat the steamed cauliflower. I win, you make me a damn cheeseburger."
Advertisement:

An indie sci-fi film from 2012 directed by Jake Schreier and written by Christopher Ford, starring Frank Langella, Susan Sarandon, James Marsden and Liv Tyler. The film first premiered at the Sundance Film Festival 2012 and is the winner of the Alfred P. Sloan Feature Film Prize.

Frank Weld is a retired thief and con man living a quiet life in small town in the near future, slowly succumbing to a combination of boredom, loneliness, and the onset of Alzheimer's. To address the situation, his son Hunter bestows upon him a robot living assistant to help take care of him. Despite his initial antagonism towards Robot, Frank eventually warms up to it as he realizes it can be easily manipulated to his will. Meanwhile, the town library is being reformatted, the old paper books are being replaced, and the old librarian fired in favor of a "Augmented Reality library experience". Frank decides to teach his new friend all the old tricks he knew about crime and together they perform a series of capers.