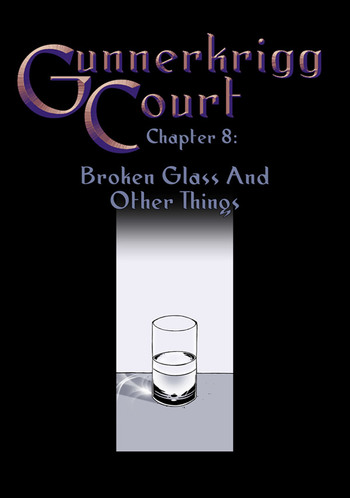 What about the birds?

Young Annie drops a glass of water, and it breaks. She apologizes. Her mother says, since she didn't cut herself, it's nothing to be concerned about, because sometimes things fall and break. Older Annie, falling from the bridge over the Annan Waters, knows how the glass felt.

The Tic-Toc birds come, and grab her, and slow her fall. Annie thanks them, and they drop her in the river. She swims to shore, and takes off her sweater to let it dry out. As she's wringing out her hair, she sees a light shining in the distance from the opposite shore — the Court's shore. She finds a dead Tic-Toc on the ground. Annie notices something odd about it, and cuts it open with a pair of scissors she had in her pocket. The Tic-Tocs are mechanical.

A familiar shadow comes out. Annie's not happy with him, believing Shadow 2 to be responsible for whatever was wrong with Robot. She tells him to go away. At this point, she's told off by an angry fairy with spiky red hair, who's turned up with her blue-haired friend. "Red" asks Annie if she can't see how upset Shadow 2 is. Annie says he should be, and Red clarifies that it was another shadow that made Robot push Annie off the bridge. Annie's happy to see Shadow 2 after learning this. Shadow 2 can now make noises, and Annie's surprised he can talk. Red tells her he can't do it very well because he's just a kid. "Blue" says they should go, but Red thinks Annie could help them. How? By squishing them with a rock. Annie is understandably loath to do so, and asks why. Red and Blue tell her it's to pass a test, and they're stuck down at the bottom of the ravine if they don't finish. They can't kill themselves, either. That's cheating.

The fairies decide to ask someone else: a shirtless owl-headed man who's suddenly appeared. His name is Muut, and Annie knows him. She asks him if he's here for the bird, but him and the group he's part of "do not deal in electrical appliances." He had business nearby, and wanted to see how she was. Annie says she's fine. Muut disagrees, saying that someone who's "fine" wouldn't be at the bottom of the ravine. He can't help her, either, but Annie doesn't want it anyway. He has something to give her, a present from Mort the ghost, which might come in handy. Annie has one question for Muut before he goes: does the light on the opposite shore belong to him or any of his friends? Muut's response:

"Someone beyond even our reach. Be thankful she cannot cross the river."

Muut then leaves, revealing as he does that he escorts the dead, and Annie is angry with him for some reason. Red asks Annie if she's going to use Mort's present, which is something called a "blinker stone". Annie uses it to make a fire.

Young Annie is cleaning up the broken glass. Her mother tells her she doesn't need to, because she might hurt herself. As predicted, Annie cuts herself on the finger. Older Annie, sitting on the riverbank, asks the fairies about the test. They need to finish it to get new bodies, so they can go to "the Gunner's Crag". It turns out that yes, they do actually mean the Court, and they're shocked when Annie tells them that's where she's come from. Red and Blue are the last members of their class to get to the Court. Annie is surprised to discover that some of the Court students are ex-fairies. Red wants to know if it's fun at the Court, and Annie responds in the affirmative.

Hours later, everyone is asleep, and the glowing white ghost woman does what should be impossible, and crosses the river. Red wakes up first, and is terrified by the apparition. Annie wakes up to find the ghost standing over her. She wears long white robes and carries a sword. Annie asks her how she crossed the river, only for the ghost to take a swing at her and cut her on the cheek. Annie shies away from the ghost's attack, only for a blinding white light to come from above: It's Kat to the rescue on a flying scooter. The ghost disappears. Kat built the ship out of her antigravity module from the science fair. Annie feels her cheek, and there's no cut. Annie says goodbye to the fairies, and gives Shadow 2 a lift in her shoe. She grabs her blinker stone, and Annie and Kat take off for the Court as the ghost woman watches.

Annie tells Kat she thinks that the Court isn't just a school, and suggests they should find out what it really is.