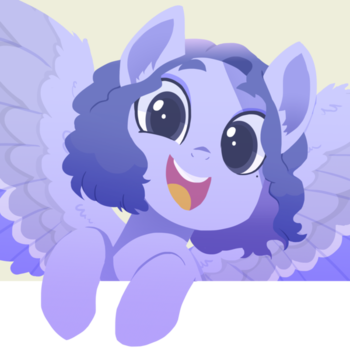 (AKA: Ki) is an artist who is well known for making next generation OC's of the cast of My Little Pony: Friendship Is Magic, mainly the Mane 6, Celestia, Luna, and various other Ponyville characters. Her OC's are very well received for their well-drawn designs and detailed personalities. Her works have inspired many fan fictions based on the Next Gen characters from her universe, mainly focusing on the lives of the next generation children, working off of their personalities to set up various situations that often test and display their character traits.

She also has a group

dedicated her characters, a Wiki page

Stories centered around Kilala's work (Any tropes for these stories must go to their respective trope pages):

open/close all folders
By kilala
By Between Lines
By Bico
Advertisement:
By Black Skulls
By Borsuq
By cemfin
By Chaotic Lightning
By Chelis
By Cobolt Soundwave
By Darkness Rising
By The Dragon Warlock
By Ebony Stallion
By Equestrian Riders
By Fiction Freek
By Flightless
By Illumipony
By isuckdotcom
By Lumino Zero
By Michael Ravencroft
By The Messenger
By Not A Real Ponydotcom
By The Princess Rarity
By Punsz
By Revenant Ghost
By Riter
By Solid Ferret
By Swift Swap
By Twinkletail