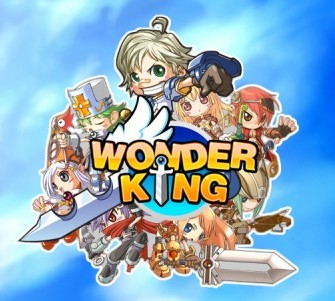 WonderKing was a Free-to-Play 2D sidescrolling MMORPG from Korea with a look and feel quite similar to that of a certain other free-to-play 2D sidescrolling MMORPG from Korea. One thing that set it apart from its more well-known counterpart was that the Level Grinding was much quicker and went up to level 140. While more endgame content was promised, such as new areas and mobs, new quests, and another upgrade to each class, such upgrades came in very slowly. As such, the current end game content is rather sparse.

The game was launched in Korea and Japan in 2007. A North American version

followed in 2010, and was hosted by nDoors Interactive. Interestingly, the gameplay in this version was drastically altered from the Korean and Japanese versions, and it was the only version with PvP. However, WonderKing is now a Defunct Online Video Game, with the NA version going offline first in December 2011, and the other versions of the game following suit in 2014. There have been fan attempts to bring it back online, but none have been very successful.

There were four available character classes, each of which can advance to one of two subclass paths.