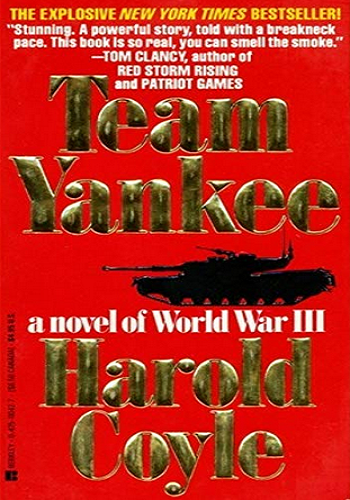 What would happen if the Iran-Iraq war escalated into something much bigger? After an incident in the Strait of Hormuz between an American destroyer and a Soviet cruiser, the Cold War turns hot: more specifically, into a conventional World War III between NATO and the Warsaw Pact. The eponymous Team Yankee, an American heavy armored company, is stationed in Germany at the time, and must fight the Soviet advance.

The book is itself set within the universe established by The Third World War, and expands upon one of the short mentions within that book.

It was adapted to a Tabletop Game, a miniature wargame, a Graphic Novel, and a tank simulator for the Atari ST, among other consoles.