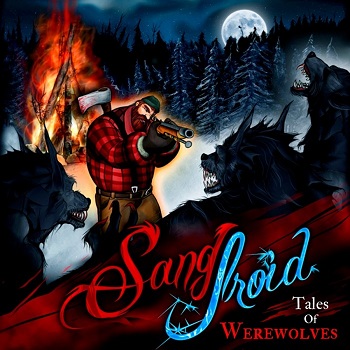 "I'll make stew from what's left of you, dagnabbit!"
Advertisement:

Now that we've gotten rid of the possible notion that the Canadian stereotype of being soft-spoken would apply to this page, more seriously...

Sang-Froid: Tales of Werewolves is a third person hack-and-slash trap-based defence game by Artifice Studio. You take the role of one of two Canadian lumberjack brothers in the 1850s, protecting their ailing sister from the Devil's minions. By day, you plan defenses, set traps, and buy supplies. By night, you shift to a third-person camera upon the brother you're playing as and head out to trap, crush, impale, explode, shoot, and hack up anything that invades your land. Tales of Werewolves is the "Tome I" of a clearly planned series.

Basically, it is to Canada just as Hostile Waters: Antaeus Rising is to Britain and Metal Wolf Chaos is to the USA.

It got Greenlit by the Steam community and was released in April 2013.

Plans for "Tome II" include the additions of new items and traps as well as a campaign co-op mode.