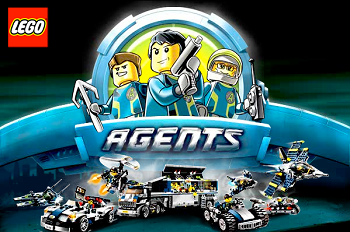 Here's your next mission.
LEGO Agents is a LEGO Theme beginning in 2008 and continuing into 2009, revolving around a team of secret agents who foil the dastardly plans of Dr. Inferno, a Mad Scientist who wants to Take Over the World.
Advertisement:

In the first wave of sets, the Agents went on eight missions across the globe, tracking down the activities of Dr. Inferno's henchmen and foiling their plots, all the while trying to figure out Dr. Inferno's master plan. Their mission eventually leads them to Dr. Inferno's secret Volcano Base, where they must shut down the giant laser cannon before time runs out.

The second wave of sets is retooled as Agents 2.0 and is centered in LEGO City as part of a multi-theme crossover. After his first defeat, Dr. Inferno claims to go clean and uses his fortune to fund a racing championship, hoping to distract the populace while his henchmen continue carrying out crimes. Eventually, the Agents uncover Dr. Inferno's plot to unleash his robot mech to terrorize the city.

LEGO Agents is often considered a Spiritual Successor to LEGO Alpha Team. Compared to its predecessor, LEGO Agents places less emphasis on individual characters and, rather spending a full year devoted to each mission in a single environment, depicts multiple global missions in a single year. LEGO Agents also goes for a more undercover approach to the secret agent theme, while LEGO Alpha Team focused more on the team's search for Ogel's bases.

In mid-2014, LEGO Agents received a Spiritual Successor of its own, LEGO Ultra Agents.