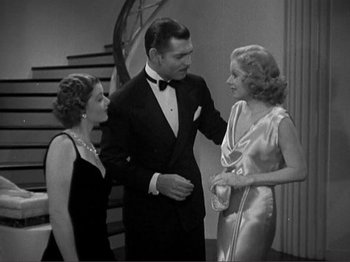 Watch out, Linda!
“There’s an old Chinese proverb that says ‘If you want to keep a man honest, never call him a liar.’”
Advertisement:

Wife vs. Secretary is a 1936 comedy film directed by Clarence Brown.

Van "V.S." Stanhope is a magazine publisher, so wealthy that his servants have servants. He and his wife Linda are living in palatial comfort and domestic bliss. Unfortunately, Van's mother can't keep her nose out of her son's marriage, and more unfortunately, Ma Stanhope's marriage apparently collapsed when her husband cheated on her. Ma Stanhope is very suspicious of Van's smoking hot secretary, Helen "Whitey" Jackson.

There isn't anything going on between Van and Whitey; Whitey has Dave, a loyal boyfriend who has asked her to marry him. But Ma Stanhope's paranoia starts to make Linda paranoid. When Van elects to buy out another magazine, he does it in secret, with only Whitey helping him make the deal. This secrecy makes Linda even more suspicious of the relationship between Whitey and Van.

Wife vs. Secretary boasted a remarkable selection of MGM talent: Clark Gable as Van, Jean Harlow as Whitey (this being the fifth of six movies Gable and Harlow appeared in together), Myrna Loy as Linda, and 28-year-old James Stewart in one of his first big roles as Dave.